Brief History of My Support Group 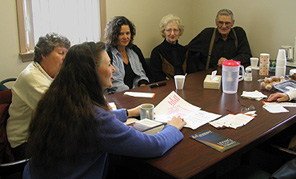 When I started my Cancer Prayer Support Group in October 1991, I had no clue what I “should” do other than knowing God wanted me to do it! My plan was for a one-hour, once-a-month meeting because I didn’t want to sit around with a bunch of cancer patients and get depressed. A funny thing happened though. As we met together, we found our sorrows halved and our joys doubled and we always left feeling better.

We started meeting twice a month (once in the evening and once in the daytime) and I can honestly say that my groups became a source of great joy for me.

In the mid ’90s I contacted Dave Dravecky’s Outreach of Hope (now called Endurance) to find out about other Christian-based support groups. I wanted to talk to facilitators who had been meeting longer than I and get some ideas about running my group. Was I ever shocked to find out my group was the oldest on their list!  To my knowledge my support group (which is still meeting with my successor) is the OLDEST faith based cancer support group in the country!

So here is what I’ve gleaned over the years and wish I had known when I started: