A Good Word (or two or three) for the New Year

Do You Have Home-Field Advantage?

God’s Answer to My Unrealistic Prayer

I distinctly remember a day in August 1980 as one of the saddest of my then 26-year-old life. 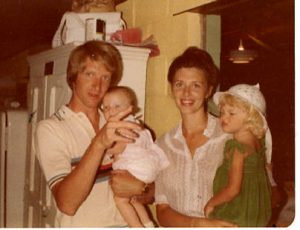 My husband and I, our two little girls in our arms, watched the moving van pull away with all our worldly belongings. Tears streamed as I said goodbye to my dearest friend, Gigi, her husband George and their three little boys. I finally had a friend with whom I could share the ups and downs of mothering, marriage and ministry, but my husband’s new job was taking me away. (He later called that move one of his “worst decisions ever.”)

This is the story of how that decision led to God answering my seems-to-be-too-good-to-be-true prayer.
+++++++++

When our oldest daughter Danielle was 6 weeks old, the Gaffgas moved to our western New York village (think, one stoplight and lots of lake-effect snow!) . Their towheaded boys were 1 and 3. George pastored the Presbyterian church on one corner; my husband shepherded the Baptist flock on the opposite one. The church-provided parsonages were across the street from one another.

Our husbands enjoyed wonderful ministry between the two churches, as well as George’s practical jokes. A “For Sale” sign on our church lawn. A cracked toilet with a potted plant on our parsonage front porch…You get the idea.

In the spring of 1980, Gigi delivered a third boy six weeks after I delivered our second daughter. I had no car, no spending money, and no family nearby. But I had a friend right across the street who understood me, listened to me and prayed for me.

After our move to Connecticut, we stayed in contact mostly through letters–too expensive to call long distance! After they moved to Long Island and we moved (again!) to start a new church in Pennsylvania, we vacationed  together every summer at a free beach house on the Great Peconic Bay. 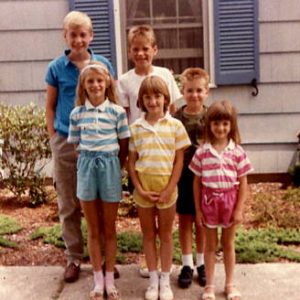 Our kids (now numbering six after adding a third daughter in Connecticut!) swam and played Monopoly together while our husbands sailed the bay and Gigi and I played the word game Boggle. 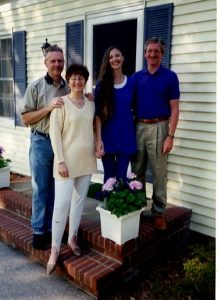 Through the years we occasionally reconnected at family graduations and weddings. Eventually technology made staying in touch much easier–texts, phone calls and online Boggle fun. Finally, we all retired–us to our current home and George and Gigi to Colorado.

When the frightening reality of the pandemic hit, Gigi became my steady contact with the outside world. We Boggled everyday to distract us from the isolation, FaceTimed while working on jigsaw puzzles, and encouraged one another that God’s love never fails.

Fast forward to early last year when my elderly neighbor across the street (in a one-story house exactly like ours) had another stroke and was hospitalized for months. Each morning as I sat at my dining room table reading my Bible and gazing at Paul’s house, I prayed for his recovery, but I added something else.

“Lord, if he can’t come home and be safe, please let George and Gigi buy his house and move here.”

It was quite an unrealistic prayer.

Even though Psalm 37:4 says that God “will give you the desires of your heart,” I know that doesn’t mean you always get whatever you wish for. But I do think God sometimes does put an “unrealistic” prayer on your heart because it is His desire.

So I prayed.  And when I found out in August that my neighbor needed to sell his house, I told the Gaffgas about my prayer.  Because they had been wishing they were nearer to their Philly-area son (a single dad with two young daughters), they started praying too. 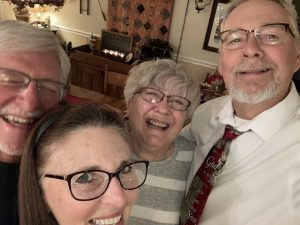 I will summarize the next few months as a whirlwind of negotiating, planning, questioning, pleading and believing. But a week before Christmas, they moved into their new home–across the street just like nearly 45 years ago.

We have come full circle. (Except now we try to get our husbands to nap at the same time instead of our toddlers 🙂 )

And we will pray the Lord uses our deep friendship to deepen His image in each of us…as together we praise the God who makes “unrealistic” prayers come true.
++++++++++++++++++++++
I pray my story has encouraged you to embrace the message of this song by Passion: “There’s Nothing that Our God Can’t Do.”