Contentment: My Oncologist Has Cancer (Part 9)

Bill and Pat Shifflet have faced five cancers in their 80+ years–some cured, others not–but please don’t feel sorry for them. The very happy couple doesn’t spend time bemoaning their own struggles; they’re too busy helping others. 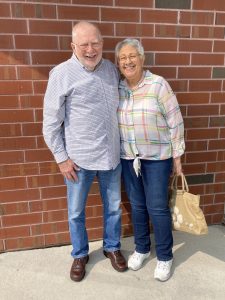 “Everyday I pray ‘God, show me a need’,” explains, 82-year-old Pat, who loves to pray for people, send encouraging notes, and serve behind the scenes.

She describes her almost 84-year-old husband Bill, as an “avid giver.”

The couple married in 1995–she, after an abusive marriage and he, after 55 years as a confirmed bachelor.

Pat was a non-practicing Catholic and Bill says he was “raised in faith” but his lifestyle did not show it. In 2000 he agreed to visit a  new congregation worshipping in a local movie theater only because he heard they had free coffee and a band.

“If they bring out any snakes, I’m leaving!” a skeptical Bill warned his wife.

No snakes appeared and the couple embarked on a spiritual journey of becoming committed Christ-followers.

It was that newfound faith which would strengthen them for what lay ahead.

A couple years earlier, Pat had encountered cancer via a malignant colon polyp. But her real trial came in 2005 with invasive breast cancer requiring a mastectomy, chemo and radiation.

Amazingly, my beautiful white-haired friend looks back happily on the whole ordeal.

“To me that was a blessing because that’s how I met Melissa and got to share Jesus with her,” Pat explains.

“Melissa was a nurse at the hospital and before my mastectomy she said ‘you must be frantic’,” Pat recalls. “‘Absolutely not; I gave it all to God,’ I told her. The next day she came into my room and said ‘When you’re well enough, can I go to church with you?'”

A few months later Pat helped baptize both Melissa and her boyfriend. 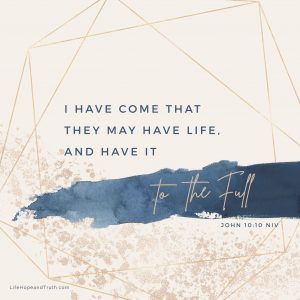 Bill’s “turn” with cancer came in 2013–a fairly low-grade prostate tumor treated with “watchful waiting.” This year he was diagnosed with a spot of melanoma. But the toughest news came in 2018: incurable multiple myeloma.

“The MRI showed cracks in my spine and my ribs looked like Swiss cheese,”  Bill recalls. “The first year, I was a mess. Besides the terrible back pain, I lost 30 pounds and shrank 2.5 inches.”

After completing his initial chemo and radiation, Bill expects to remain on a bi-weekly “maintenance” drug for the rest of his life.

But he does admit disappointment over not being allowed to downhill ski anymore. 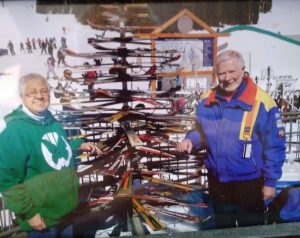 The couple spent 14 winters skiing in Colorado. Bill, an Air Force veteran and commercial pilot for 40 years was a lifelong downhill enthusiast. Pat came to love the sport in her 40s after a friend’s invitation to help at a winter Special Olympics in the nearby Pocono Mountains.

Pat volunteered despite the fact she had never put on a pair of skis! Eagerly, she watched the handsome instructor with a foreign accent patiently teaching the special needs kids. He invited her to stay after class for some personal instruction and Pat soon was flying through the soft powder. Only later did she learn that the handsome instructor was none other than champion French alpine ski racer, Jean-Claude Killy!

They offer rides to medical appointments for those in need, collect toiletries to be distributed at a local soup kitchen, volunteer at their no-snakes-church and regularly invite people out to lunch.

“God always provides, there’s always money,” Pat says with a smile. “We may have had bad times. God never promised us a rich life without cancer, but He did promise us eternity. We’re both ready to go and pray we go together.”