“Give Peace a Chance”

Dr. Marc Hirsh has walked some deep valleys since he was diagnosed in 2020 with such a serious and rare cancer that he and every specialist he consulted thought his death was imminent.

Within days he was forced to close his busy, solo practice of more than three decades and then undergo a painful thoracotomy to biopsy and de-bulk the nearly cantaloupe-size tumor behind his heart. That was followed by six weeks of radiation, daily oral chemo and monthly hormone injections. Just a few weeks later came the deep valley of  having to say goodbye to his very sick, beloved rescue-dog Jake who had accompanied him to the office every day and greeted patients for 10 years.

But then the valleys started leveling out. 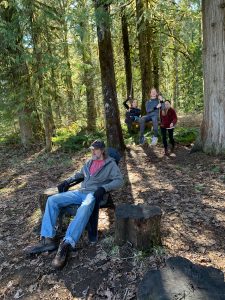 Camping in Oregon with grandchildren

The tumor shrank to about the size of an egg. The terrible pain, constant headaches, and difficulty breathing disappeared. He resumed his rigorous exercising—swimming, kayaking, paddle boarding, jogging, biking, punching a heavy bag, and backyard sports with grandkids.

And then came a definite mountaintop: turning 70 and celebrating one-year as a survivor last May.

“I still have a tumor, but it’s not growing,” Marc explains. “I have a little chest pain and shortness of breath sometimes, but I’m able to pretty much do anything I want.”

The second followed shortly after and was a literal mountaintop experience.

After the good news at the Hershey Medical Center check-up, Marc and wife Elizabeth headed out West to visit older daughter Jessi and her family. As Elizabeth drove through Idaho, Marc commented that they  were “only” about 100 miles from Sun Valley, where he had heard the downhill skiing was incredible. 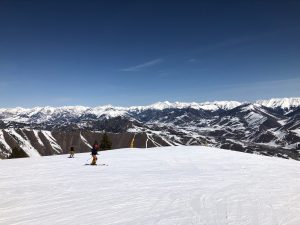 “So Elizabeth gave me an early birthday present and drove all the way to Sun Valley,” he explains.heh

They arrived about midnight and secured a room at the lodge so Marc could celebrate his soon-to-be 71st birthday with his first ski in the West. (Normally he skis near his south-central PA home where the mountain vertical drops are about 400 feet or enjoys trips to Vermont with slopes of about 1,000-2,000 feet.)

An avid skier since his early teens, Marc got up early the next day and boarded the shuttle to Bald Mountain. When he got to the top, he could hardly believe his eyes.

“The vertical drop is in excess of 3,000 feet and I was looking down on snow-covered peaks!” he explains.  “It was amazing!”

Three hours later and  completely exhausted from plowing through the white powder, Marc came down from the mountain.

But that thrill remains.

“While I was up there I was thinking about this whole (cancer) experience,” Marc says. “Two years ago I was at the lowest point and now I’m on top of a mountain. I have a special gift just being alive–God didn’t have to give me this, but He did.” 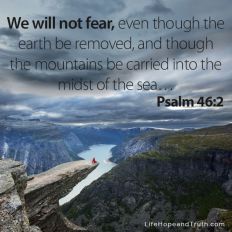 “I’m just blessed to think of the whole experience,” he adds. “I have less distractions in my life so I’m more appreciative, more grateful. I still don’t know what’s in the future, but I’m not afraid of it.”