How to Love Yourself as Your Neighbor

An Inspiring Story from an Unlikely Survivor

The Lesson I Learned from a C-5 Cargo Plane

Raise your hand if you have never been in the military, but you have flown in a C-5 cargo plane?

I’m guessing I may be the only one wildly waving my arm.

Perhaps at an air show, some of you have had the pleasure of walking around inside the cargo section of the largest U.S. military transport. According to airforce-technology.com, the C-5 can carry two Abrams tanks; one tank and two Bradley fighting vehicles; 10 LAV light armored vehicles; or six Apache helicopters. (Popular Mechanics adds that almost 25 million ping-pong balls also could fit inside!)

In the summer of 1973, my father was a civilian personnel officer stationed at Bitburg AFB (Germany). As long as I was his dependent, I could have free stand-by flights between our homes.  I had flown commercial to Germany and was not at all concerned that the only return flight was on military transport.

Perfect example of ignorance is bliss.

The C-5 seating area had absolutely no windows and conversation with seat mates proved impossible over the engines’ roar.  Each passenger was handed three items: a motion sickness pill, ear plugs and a heavy blanket. Drinking water was available in a bucket, along with a metal dipper and paper cups. We were told bag lunches would be provided if the flight wasn’t too turbulent.

I was woefully unprepared for how austere this 13-hour flight was going to be, although my first clue should have come when I was in the boarding line and a young airmen behind me inquired, “Miss, would you like some help?”

I turned and gave him a sweet smile and a quick “no, thank you.” After all, I was an independent 19-year-old college senior who, of course, could take care of herself.

And then I got to the cargo entrance and saw the narrow, vertical ladder.

It went straight up through the belly of the cargo area and into a small opening.

I quickly searched for the kind airman, told him I’d reconsidered, handed over my belongings, and slowly began ascending the steep ladder. I doubt the airman recalled his good deed from that day, but I have never forgotten it…and the lesson it’s still teaching me 48 years later: 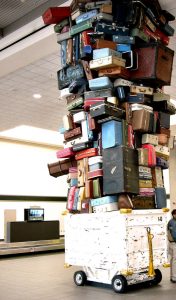 Photo by Linda DuBose from FreeImages

I’m inclined to hang on to baggage.

Sometimes I lug around negative emotions which steal my peace. (What, me worry?) Other times I hold on to unhealthy habits which stifle my spiritual growth. (Perfectionism, anyone?)

How about you? What’s weighing you down today? Fear of the unknown or even of what is known? Concern for  friend or family member? Maybe  a physical burden which gives way to an emotional or mental weight?

Psalm 68:19 has good news for all of us baggage carriers:
Praise be to the LORD, the God our Savior, who daily bears our burdens.

And Jesus offers a wonderful solution for our predicaments:
“Come to Me, all who are weary and burdened, and I will give you rest.
Put My yoke on your shoulders–it might appear heavy at first,
but it is perfectly fitted to your curves.
Learn from Me, for I am gentle and humble of heart.
When you are yoked to Me, your weary souls will find rest.
For My yoke is easy, and My burden is light.”
–Matthew 11:28-30 The Voice Bible

What baggage are you holding on to as you face a steep climb of circumstances? I recommend you do what I continually have to do… swallow your pride and hand your burdens to Jesus. (He’s even better than a really kind airman.)
++++++++++++++++++++++++++++
Don’t miss  the music video  by Austin French–it’s only about 3 minutes and will help you experience “Rest for Your Soul.” (Be sure to open in your browser.)