How to Stay Calm in Football Games…and in Life

“She stood in the storm and when the wind did not blow her way—and surely it has not—she adjusted her sails.” –Elizabeth Edwards

Hope is the Thing with Feathers

If you had asked my friend Carollynn Supplee what gave her hope throughout her cancer journey, she would have smiled and quickly answered: Feathers.

She loved Emily Dickinson’s poem “The Thing with Feathers” which begins:

Hope is the thing with feathers
That perches in the soul,
And sings the tune without the words,
And never stops at all. 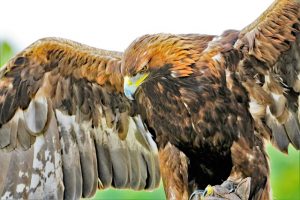 When she was first diagnosed with a brain tumor at the age of 46, Carollynn discovered a Bible verse that quickly became her favorite:

Even though medical doctors and treatments at that time gave her no hope of surviving more than a few months, this verse gave Carollynn incredible hope. It also started a real fascination with feathers and the number 914.

“Whenever I see a feather it reminds me of God’s protection for me,” she told me shortly after moving to the area and joining my support group. “And I like to look for the number 914 on signs to remind me of God’s constant care for me.”

I had to chuckle when eight years after her initial diagnosis Carollynn held her first grandchild, born on her birthday and weighing 9 pounds, 14 ounces! When Carollynn passed away a few months later at 4:19 p.m., her husband Ed said he smiled at  Carollynn’s last gift to remind him of her special verse.

“One final example of her fabulous humor,” he wrote in an email to friends and family. 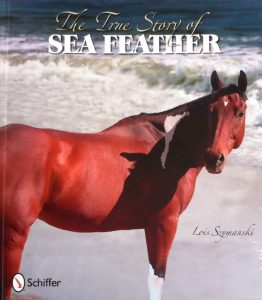 Probably the most amazing, hope-filled story of Carollynn’s life under God’s wings happened in 1995 shortly after her diagnosis when she and Ed traveled to Chincoteague Island, VA, for the annual Wild Pony Swim & Round-up. The couple planned to buy a wild pony and donate it back, but when they arrived all the turn-back ponies were sold.

Meanwhile two little girls with $500 were desperately trying to buy a pony to take home, but the price always was too high. Carollynn noticed one of the girls had feathers on her shirt so she introduced herself to the family, shared her recent brain tumor diagnosis, God’s promise to cover her with His “feathers,” and her desire to give back a pony. It took some convincing, but finally the girls’ parents allowed the Supplees to buy them a pony.

They all thought Pony #42 was solid brown, but as he turned, a lone white streak resembling a jagged feather became visible. The girls named him Sea Feather.

For the next eight summers the Supplees traveled to Chincoteague and gifted a pony, including the final year when a wheelchair-bound Carollynn purchased “Chincoteague Miracle” for a sobbing little girl whose dad had recently passed from cancer. (A nonprofit “Feather Fund” established to continue the couple’s work has since given away 45 wild ponies including the 2004 recipient pictured below. https://www.featherfund.net ) 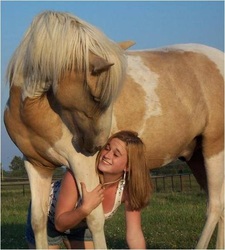 Because you are my help,
I sing in the shadow of your wings.
My soul clings to you;
your right hand upholds me. Psalm 63:7-8

Can you feel those “wings” over you—protecting you, shielding you, drawing you close? Have you trusted God enough to truly let Him cover you? He longs to do that for you.

“How often I have wanted to gather your children together as a hen protects her chicks beneath her wings,
but you wouldn’t let me.”
Jesus speaking over Jerusalem in Matthew 23:37