Living with Uncertainty: My Oncologist Has Cancer (Part 4)

How to Stay Calm in Football Games…and in Life

“Cancer will not steal one day from me!”

Not long after Donna Wishowski was diagnosed with cancer, she made a decision which would radically shape the next 17 years of her life: “Cancer will not steal one day from me!” 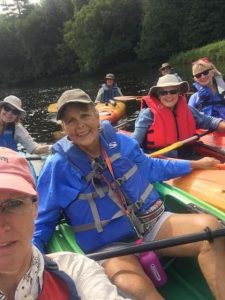 It was a choice that no matter how many days she had left–or didn’t have left–she would not allow a disease to control them.

Oh, cancer tried plenty hard to do just that. It tried to steal her joy when she was first diagnosed in 2003 at the age of 52.  But she went through surgery, chemo and radiation–all the while trusting that “God has a purpose for my life.”.

And then less than two years later it tried to steal her faith by metastasizing to her lung. But she endured more surgery–always choosing to seek God as she “let the day unfold” before her.

In 2008 cancer made a desperate plea to steal Donna’s hope by taking Lee, her husband  of 40 years. But instead she insisted she would “be present in the moment” and not future what-ifs.

Then in 2015 cancer attempted to steal Donna’s strength as her long remission ended and the disease returned with a vengeance. But Donna persevered with her T.A.C.O. philosophy: Trust, Adventure, Challenge & Opportunity.

I didn’t know any of Donna’s story when she and her friend Jeanine emailed me in 2018 to tell me they had been praying with and giving away copies of my books to all the cancer patients they met.

The two ladies invited me to come to Ladysmith, Wisconsin, and share my “When God & Cancer Meet” seminar. I honestly tried to get out of it when I saw what a hassle it was going to be to get to their little town in the middle of nowhere: a 90-minute ride to the airport, two plane flights, and then a three-hour car ride. But it’s really hard to say “no” to a Stage 4 cancer patient who is determined to share the love of Jesus with hurting people.

And that’s how I had the distinct pleasure of meeting Donna in June of 2019.

Her daughter Bobbi says that year her mom’s “faith continued to grow stronger even as her blood counts fell and her cancer markers climbed.”

Declining health didn’t stop Donna’s ministry of encouragement. In March of this year, she ordered more of my books to give away and talked to my husband about how to start a prayer ministry at her church.

In July Donna decided to stop treatment, but cancer was not about to steal her love of the outdoors (including gardening, hiking, kayaking, snowshoeing and tubing). On July 17 she went for her final kayak ride (pictured above). 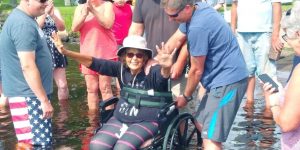 On August 15 she planned to be boating on the river again, but was too weak to walk or climb into the kayak. Instead friends lifted her wheelchair into the water as she waved and flashed her beautiful smile.

Two days later–just shy of her 70th birthday–Donna Wishowski went Home to her Lord and Savior, having kept her promise that “cancer will not steal one day from me.” 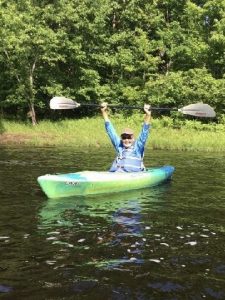 I don’t mean to say that I have already achieved these things
or that I have already reached perfection.
But I press on to possess that perfection
for which Christ Jesus first possessed me.
No, dear brothers and sisters, I have not achieved it,
but I focus on this one thing:
Forgetting the past and looking forward to what lies ahead,
I press on to reach the end of the race and
receive the heavenly prize for which God,
through Christ Jesus, is calling us.

And that, my friends, is  how we keep cancer–or anything else–from stealing even one day from us.