How to Keep Calm and Carry On

What are your fighting against these days? Cancer? Addiction? Depression? Discouragement?

Or what are you fighting for?  Your marriage? A wayward loved one? Improved finances? Restored health? 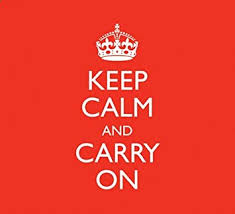 Keeping calm in the face of impending disaster actually is a recurring message throughout the Bible.

As the Israelites fled from Pharaoh’s enslavement, they panicked when the Egyptian army began overtaking them. “But Moses told the people, ‘Don’t be afraid. Just stand still and watch the LORD rescue today…The LORD himself will fight for you. Just stay calm.” (Exodus 14:13-14)

Sure enough, the Red Sea parted, the Israelites walked through on dry ground and then the waters rushed back, drowning all the pursuers.

There’s another great calming story  in 2 Chronicles 20. The short background is that the Jewish King Jehoshaphat was told that some great armies were coming to attack him. His response was not atypical from what ours might be—he “was terrified and begged the Lord for guidance.” Shortly, God answered his prayer by sending His Spirit to speak through one of the king’s men:

He said, “This is what the Lord says: Do not be afraid! Don’t be discouraged by this mighty army, for the battle is not yours, but God’s. Tomorrow, march out against them… But you will not even need to fight. Take your positions; then stand still and watch the Lord’s victory. He is with you, O people of Judah and Jerusalem. Do not be afraid or discouraged. Go out against them tomorrow, for the Lord is with you!”

The king and his people believed God and began to worship Him, praise Him and sing to Him. At the very moment they did this, the Bible says God caused the approaching armies to fight amongst themselves and kill each other. The Israelites won the battle without a fight because God fought for them.

Standing still and being calm does not logically sound like a good way to win a battle. But then God’s ways are not always our ways, are they? The armies coming against the Israelites were way too large and powerful to be defeated. The situations were hopeless from God’s people’s perspective—but hope-filled from God’s vantage point. 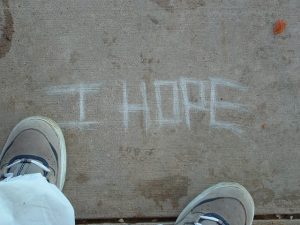 Perhaps the problem  you or our loved one is facing seems too difficult or even hopeless. But as my pastor, Brian Jones, reminded our congregation recently: “Every miracle in the Bible is preceded by a problem.”

Whatever problem you are fighting against–or for–is setting the stage for God’s divine intervention. I can’t promise exactly how He will deliver–whether the situation will miraculously resolve or if He will supernaturally empower you to get through it.  But if you trust Him, you can keep calm and watch the Lord’s victory.

So stay calm, dear friend, and know that even if what you see doesn’t seem to make sense, God is fighting for you. And please remember…He’s never lost a battle.

(Be sure to open in your browser to hear the music video “Never Lost a Battle” by Elevation Worship.)