Ever feel like you want to run and hide?

Do you have as much faith as my granddaughters?

Tens of millions of people around the country filled out online brackets for the NCAA men’s basketball tournament, including twelve in our family. We seven adults are true sports fans and the five grandkids in our group are being properly schooled in bracket lingo, including the art of choosing a cool team name. Heading into the Sweet Sixteen “Mr The B-Man Bauer,” age 8, sits alone in first-place, followed by son-in-law “Nice Guy Frank” and “Grandma’sGotGame,” while “Ben the Gryphon,” age 6, is closing in on his mom, “Lindsey’sFeelingLucky.”

There also are folks who don’t even know anything about basketball, but still participate in March Madness.

I heard a local radio DJ admit she doesn’t normally follow college basketball, but really likes cheese so she picked Wisconsin to make it to the Final Four. She selected Duke to win it all because she likes the cartoon dog Marmaduke.

But the craziest selection method I heard was a young woman who never watches basketball  and admitted: “I picked my bracket on the colors of their costumes.” (She chose Maryland to be crowned champs and although the Terrapins “costumes” are colorfully decorated with the state flag, they got beat in the second round.)

Pictured here are two of my granddaughters, “CallieCallieboBallie,” 4, and “IzzyBizzy,” 6,  first-year participants in filling out brackets. The only basketball team they have ever watched–or even heard of–is THE Ohio State Buckeyes, so guess who they both picked to take home the trophy?…Of course, Grandma’s alma mater.

Their mom, our middle daughter Bethany a.k.a. “LetsGetReadytoCrumble,” who played college basketball, gave them a choice each round between Ohio State and whomever the girls predicted they would face. Every time, each girl was unwavering in her decision. No amount of suggestion, logic, odds, statistics, or “colorful” costumes was going to change these sweet girls’ minds.

That, my friends, is childlike faith.

I think it’s the kind of faith Jesus was speaking about in Matthew 19 when His disciples tried to keep some little ones from “bothering” Him. Instead Jesus placed His hands on them, blessed them and announced that the “Kingdom of Heaven belongs to those who are like these little children.” 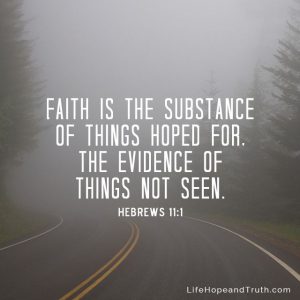 It’s the kind of faith the writer of Hebrews speaks of in chapters 11 and 12: “Faith is the confidence that what we hope for will actually happen; it gives us assurance about things we cannot see.”

I love the tenacity of my granddaughters’ faith and their resolve to stand by “Grandma’s team” (I only picked the Buckeyes to win in the first round!) The problem is that the object of their faith was not fully reliable.

The faith that scripture admonishes us to have is in an all-powerful, all-knowing, all-loving, merciful, just, holy, compassionate, sovereign God, who can be trusted to keep His promises. (Definitely better than the Buckeyes.)

Just having faith is not enough–we have to place that faith in a God, who will remain faithful to us…whether or not life is fair to us.

2 Timothy 2:11-13:
This is a trustworthy saying:
If we die with him, will also will live with him.
If we endure hardship, we will reign with him.
If we deny him, he will deny us.
If we are unfaithful, he remains faithful, for he cannot deny who he is.

Enjoy March Madness and let it remind you against all odds and in spite of all naysayers to have a childlike faith in your Heavenly Father. And if you want a chuckle today, enlarge the photo of my granddaughters to see the score they predicted for the championship game. Eliza has OSU winning 99-2 and Callie, who didn’t have quite as much faith, forecast the Buckeyes winning 90-4. Do you have as much faith as my granddaughters?

(Be sure you open blog this in your browser to hear the music video below: “He’s Always Been Faithful” by Sara Groves and suggested to me by my oldest daughter, “Aunt D is Ready to Win.”)