“A mermaid has no tears, and that makes her suffer all the more.”–Hans Christian Andersen

What to Do When the Stress Never Ends

Why You Shouldn’t Trust Everything You See and Hear

I was in sunny Colorado (hence the glow on our faces!) visiting Gigi, my friend of 40 years, when all the 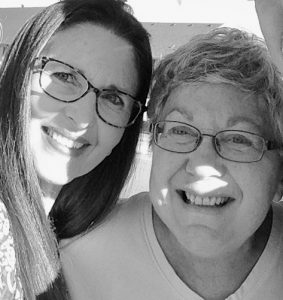 hoopla broke over “Laurel or Yanny.”  After we finally stopped talking and playing Boggle long enough to listen, I was shocked Gigi heard “Yanny,” as I would have bet my firstborn that the word was “Laurel” (sorry, Danielle). If you’ve been living under a rock, here’s the recording http://time.com/5278817/yanny-or-laurel-audio-clip-debate/

I’m the kind of skeptical person who likes to depend on my own five senses, but debates like this one (and the white/gold or blue/black dress uproar in 2015 https://www.nytimes.com/2015/02/28/business/a-simple-question-about-a-dress-and-the-world-weighs-in.html) remind me that we can’t always trust what we see or hear as the final word. In fact most of this world is invisible to us, and yet crucial for life and many medical treatments.

The only portion of the electromagnet spectrum that the human eye can detect is visible light, but we sure 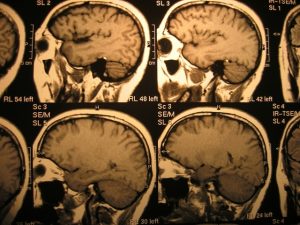 depend on the rest of those electromagnetic waves to get us through the day. Very long radio waves allow us not only to listen to the radio, but also watch TV, utilize the microwave, and call or text on our cell phones. And at the other end of the spectrum, short X-rays give us useful information about our health, and even shorter gamma rays make possible specialized radiation treatment for brain tumors.

And much of the world is inaudible, too. We all know the human ear only can hear a portion of sounds—those in the 2-20 kilohertz range. Dogs can hear much higher frequencies (up to 60KHz,) as can cats, who always pretend they can’t. But did you know most people can expect age-related hearing loss called “presbycusis?” That new vocabulary word explains why my seven-years-older-than-I-am-husband can’t ever seem to hear me.

And although Ralph’s hearing is not as acute as mine, he always has had a superior sense of smell. But his keen nose is nothing compared to a dog’s super-smelling abilities—about 300 million nasal sensors, six times more than a human. Canines already are used by law enforcement agencies to search for bombs and illegal drugs, but medical researchers are studying whether man’s best friend can “sniff” out cancer, too.

A 2016 CNN report described a dog named Lucy, who was kicked out of guide dog school because she was too distracted by odors. So her owners decided to take advantage of her sniffing prowess and train her to find malignancies instead. Apparently she can detect cancer’s unique odors and was reported to correctly sniff out cancer 95-percent of the time over a seven-year period. Clinical trials are continuing. 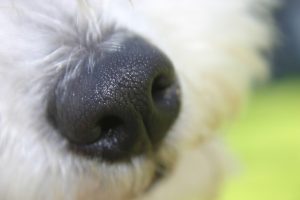 Other dogs have been described to accurately identify melanoma by sniffing moles and prostate cancer by taking a whiff of urine. (We already have CAT scans, why not DOG sniffs?)

Researchers also are checking to see if the volatile organic compounds found in our breath can be used to detect breast and lung cancer at early stages. Imagine taking a breathalyzer notto see if you’re too impaired to drive, but to find out if you have a malignant tumor.

And if you really want to blow your mind about the invisibility of our world, check out all the scientists who say what we can see is only a fraction of the whole universe.

I’ve read differing percentages, but most say the stars, planets and galaxies that can be seen make up only 2- to 4-percent of the universe. The remaining 96- to 98- percent can’t be seen, detected or even comprehended by astronomers!

I would never be confused with a quantum physicist, but I have known for decades that what is visible in this world is notthe sum of reality. I believe Plato knew it centuries ago when he asserted “the visible is a shadow cast by the invisible.” And the Rev. Dr. Martin Luther King Jr. echoed the Greek philosopher’s view in the 20thcentury when he wrote: “Everything we see is a shadow cast by that which we do not see.”

Romans 1:20 “For ever since the world was created, people have seen the earth and sky.
Through everything God made, they can clearly see his invisible qualities
—his eternal power and divine nature. So they have no excuse for not knowing God.”

This world is a shadow of the eternal power and divine nature of God. No matter how this world actually evolved, it started with a Creator and it will end one day with Him, too. 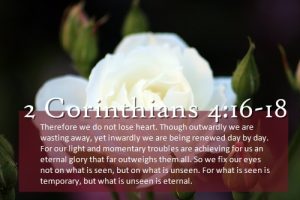 Adapted from Peace in the Face of Cancer, copyright 2017 by Lynn Eib.