Can ANYTHING else go wrong???

“Do one thing every day that scares you.”

Given No Hope–Alive and Well 50 Years Later

“There is something you must always remember.
You are braver than you believe, and stronger than you seem, and smarter than you think.”
Christopher Robin to Winnie‑the‑Pooh in Pooh’s Most Grand Adventure

I love these words of encouragement from one best friend to another. They were the sentiment of a life-changing pep talk given to me in high school by my dear friend Cecil, who is the first person I knew who survived cancer.

We met in a speech class in the fall of 1968. I was a junior and he was a sophomore at Victor Valley High, where he was without a doubt the best orator. When he chose me to be his debate partner, I was thrilled. I didn’t know that the year before he had been diagnosed with fibrosarcoma (a rare cancer of the soft tissue), only that he always had a large Band-Aid on his forehead and that its self-described “flesh” color did not match his black skin. 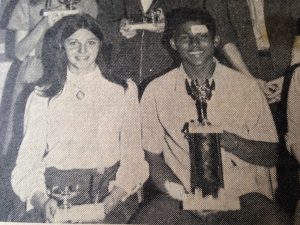 I’m not sure if either one of us ever used the “C” word. In the sixties, cancer was something adults whispered about and doctors tried to keep from patients’ knowledge.

“Why do you always wear a Band-Aid?” I naively asked him one day.

“Because I’m very embarrassed about my scars” was his quiet reply.

The scars were the result of multiple surgeries—beginning when he was fifteen—to try to cut away the cancer and extend his life.

“The fibrosarcoma was eating through my skull,” Cecil explained as we chatted on the phone about this chapter.

Back then chemotherapy was in its infancy, and radiation therapy couldn’t possibly be safely aimed at a patient’s head, so his doctors simply sliced away, waited for the cancer to grow back, and then cut it out again.

By the fall of 1968, doctors were so pessimistic about Cecil’s future, they recommended he drop out of high school. “Once it hits the optic nerve, it will go right to the brain. Go home and don’t even worry about school anymore,” they advised.

But Cecil had other plans.

His equally strong-willed mother approved, saying, “If you want to go back to school, it’s fine with me. I don’t want you to just lie down and die.”

So Cecil went to school, ran track, and played basketball and football, wearing a customized helmet to protect his forehead as he darted downfield with the ball. (Bet that wouldn’t be allowed these days!) Just about every Saturday for the next two years, we were together at a speech meet or a debate competition, eventually becoming the first students from our school to make it to the speech state championships.

But in the summer of 1970, right after I graduated, Cecil’s cancer came back, and more surgery ensued. The hole in Cecil’s forehead was getting rather large, so doctors stitched his left forearm to his forehead for six weeks in an attempt to graft skin there. However, in the fall of 1970, the relentless cancer returned.

Surgeons wanted to operate again and now sew his right arm to his head, but his mother refused. She moved him to another hospital, ignoring the doctor’s warning that if she did he’d be “dead in two weeks.”

“We can’t take any credit for this, because we didn’t do anything different from the other doctors,” they told the then-eighteen-year-old Cecil. “The fibrosarcoma was like a runaway freight train on a dry, straight track, and it just stopped. In medicine we call it a spontaneous remission.”

Cecil finished high school, serving as student body president, and went on to graduate with honors from Harvard University, where he played football, ran track, and coached the debate team. As I write, he is a sixty-three-year-old longtime university law professor with many accolades and former students across the country who say his teaching expertise and friendship changed their lives.

“Despite all the dark predictions, I’m alive and doing just fine,” he says. “I believe to this day that God healed me despite all the gloom and doom. And it has never come back because He had other plans for me.”

I’m so grateful that meeting Cecil was part of God’s plan for my life. Before we participated in our first debate meet, I was scared and not at all confident in my speaking and writing abilities. I felt insecure because I was the youngest in my class (I graduated at sixteen) and because my father’s job had forced me to twice move midyear to new high schools. But Cecil shared words very similar to Christopher Robin’s with me, and I took them to heart. And as they say, the rest is history.

When we face the trials of life. including cancer, we discover the incredible strength of the human spirit as we do things we never thought we could. But I hope you also are discovering that the greatness of God is the reason you are braver, stronger, and smarter than you realized.

Find a mirror, look straight into it, and tell yourself: “I am braver than I believe. I am stronger than I seem. I am smarter than I think. God is much greater than I can imagine.”

And then share those words today with someone else who needs to hear them. You never know how God may use them to change a life.

(If the music video doesn’t automatically load, please use this link https://www.youtube.com/watch?v=Cb4o4lN0c_E&list=RDCb4o4lN0c_E&t=23 )