The Day the Dog Walked on Water

My Dad vs. an Angry Mother Goose

Did I ever tell you about the time my father was attacked on a golf course? It’s true. After he retired, he worked part-time at a community golf course as a ranger riding one of those little golf carts. He knew there was a nesting goose on the course who had laid several eggs, and he thought he was keeping a good distance from her not-hatched-yet babies.

But mother goose apparently didn’t agree that he was far enough away and as he rode by in his cart, she circled around and began flying straight toward him. 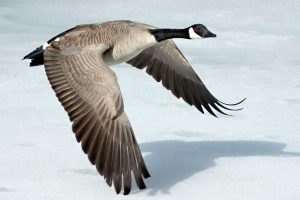 My dad kept thinking that surely she would turn, but instead she aimed her beak right between his eyes. At the last second he threw up his arm to protect his face as her broad wing knocked off his ball cap. He lost control of the cart and ended up capsizing in the nearby stream (much to the amusement of a nearby foursome on the green!).

He laughed as he later told me the story, but I was horrified.

“Dad, what if you hadn’t thrown up your arm in time?” I chided him. “Do you know what the newspaper headline would have been the next day?…’Man Goosed to Death on Golf Course’!”

Sorry that I shared my weird sense of humor there, but as an ex-newspaper reporter, I’m always thinking about stories and headlines! Anyway, the moral of this story is that a goose will do what she needs to do to protect her family!

Mother hens do likewise. Have you ever watched one clucking and spreading her wings as she tries to safely gather her chicks as some danger approached–perhaps a predator or even a storm.

Did you know that Jesus once described Himself as a mother hen? In Matthew 23:37 we read: “O Jerusalem, Jerusalem, the city that kills the prophets and stones God’s messengers! How often I have wanted to gather your children together as a hen protects her chicks beneath her wings, but you wouldn’t let me.” 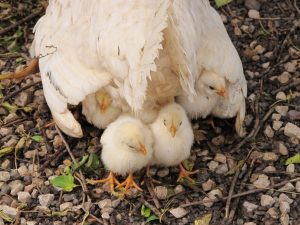 As He looked over the city of Jerusalem, Jesus knew He was the answer ti the longings of Jewish hearts, but the people didn’t want to hear it. Like a protective, loving parent, the Lord wished He could draw these folks close to His heart and keep the safe, but they wouldn’t let Him.

Can you feel those imaginary wings over you today–protecting you, shielding you and drawing you close? Have you trusted Jesus enough to let Him truly cover you? He longs to do that for you. Don’t miss your chance to be hidden safely in His arms.

Today’s song is a really old one, but the words are timeless.